To Round Out 2022, We’ve Compiled a List of Positive News Stories and Internal Successes That Happened This Year

The Downtown Partnership of Baltimore Team wakes up every morning eager to make Downtown Baltimore a destination of choice. We are building on our strengths, growing the residential population, expanding retail, and working to improve and connect Downtown’s assets. As we transition into a new year rife with new opportunities, we wanted to take a moment and reflect on some of Downtown’s big wins this year, and we believe it’s just the start. Cheers to keeping the wins coming in 2023.

Downtown Partnership was awarded $10M to support continued efforts to double down on Downtown through infrastructure, retail, and economic development initiatives. In addition, more than a dozen organizations were awarded funding to support the revitalization efforts in Downtown Baltimore and the Inner Harbor, totaling more than $155M in investment. Following the launch of Downtown Partnership’s new website and brand refresh in the summer of 2021, it was clear that our physical presence on Baltimore streets also needed some modernization. This year, we unveiled new uniforms and vehicles that are not only “on-brand” and look better, but also create a more consistent visual presence on downtown streets.

The first two grants have been awarded to Zanders, opening in the former Alexander Brown space at 135 E. Baltimore Street and Quench Juice Bar at 32 S. Calvert Street. Baltimore’s historic Lexington Market reopened in the Fall of this year with a soft launch, marking the unveiling of a new south market building, a $45 million redevelopment project that has been in the making for four years. Packed with local small business owners, a Baltimore Museum of Art outpost, several new murals and tons of events and programming, the space is thoughtfully leased with dynamic activities for all while truly representing Baltimore’s unique culture. In July, Mayor Brandon Scott convened the Squeegee Collaborative — a cross-section of stakeholders (youth, business, community, and government). He charged the group with developing a city-wide comprehensive solution to the challenges and opportunities squeegeeing presents to the City of Baltimore. More than 150 people engaged in a 4-month process to create a set of recommendations to govern and eventually eradicate squeegeeing. The Working Action plan was announced in December with immediate recommendations that are underway now. READ MORE With the help of nearly 80 volunteers, and support from BGE, we recently installed a mural at Wilkes Lane with artist Wendell Soley Supreme in an effort to brighten the alley between Harbor Bank and Lord Baltimore Hotel. For nearly two years, DPOB’s operations teams have been highly focused on cleaning up our alleys to improve the walkability of Downtown streets and enhance the pedestrian experience. READ MORE

The 2022 CIAA Tournament brought in 66,000 attendees and $19.6 million in economic impact – and that was just the start. DPOB joined the planning committee and hosted the Three Point Pop-Up in vacant retail spaces allowing for 30 black-owned micro businesses to vend, as well as MICA Students and a pop-up art gallery with Hot Sauce Collective. Downtown Partnership created the North Harbor Area of Special Signage Control (NoHa ASSC) because it is consistent with our long-standing commitment to the vibrancy and appeal of Baltimore’s Downtown. We believe the ASSC is a powerful opportunity to energize and enliven Downtown, and are excited that the Planning Commission approved eleven digital billboards to be erected in 2023.  READ MORE

New Businesses Opened (and Some of Our Favorites Reopened!) We were excited to welcome a handful of new neighbors this year. NKVSkin, Edible Arrangements, Werner’s, Taqueria La Patrona, Darker Than Blue, and Hotel Ulysses all joined the Downtown Baltimore landscape. Some of our favorites re-opened, too. Including The LB Bakery, B&O America Brasserie, and Brown Rice Korean Grill.

Community Legacy and Project C.O.R.E. are two of our best tools for addressing blight Downtown. In 2022, we helped Guardian House secure 1.5 million in financing and submitted 9 new applications for FY23 grant support.

Our ongoing partnership with Baltimore City Mayor’s Office of Employment Development (MOED) helped over 50 people land jobs with fair pay, benefits, and room for growth within our organization as members of the Downtown Cleaning Corps (DCC). This year, 5 DCC members have transitioned to full-time DPOB team members. 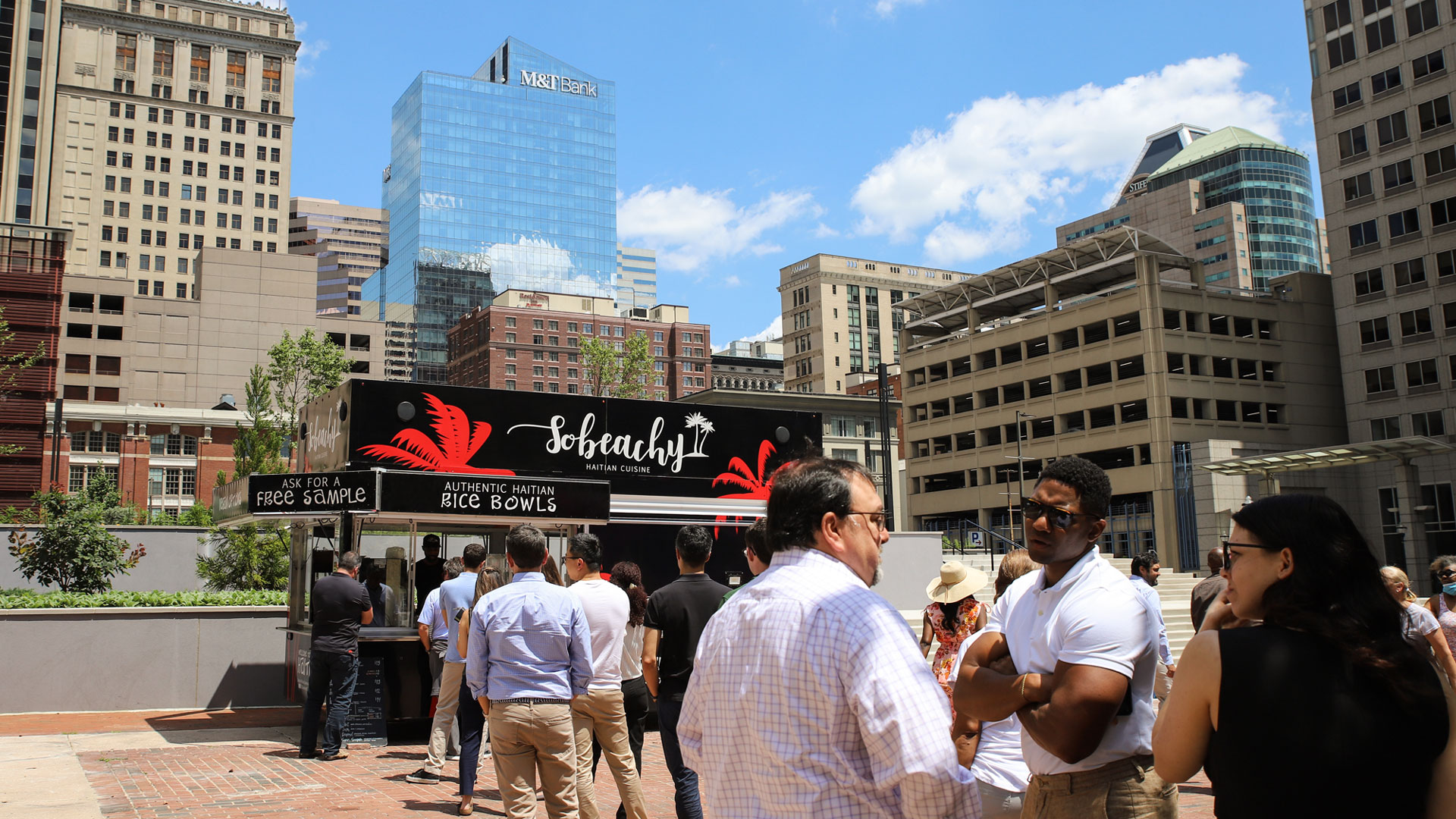 Streetscaping and landscaping cannot be overlooked. In the level of importance, they are increasingly important as we make Downtown Baltimore a neighborhood of choice for our stakeholders. Park Stewards planted over 250 flower pots and 22 flower beds in spring and fall, cleaned and maintained four park spaces, and maintained the bioswales along Pratt Street.

Congratulations to Downtown Partnership President, Shelonda Stokes, who was celebrated on multiple occasions for her excellent leadership. Not only was she selected as one of Baltimore Business Journal’s Power 10 Honorees during their 2022 CEO of the Year Award Ceremony, Shelonda was also named one of the 2022 Influential Marylanders by The Daily Record!

On a mission to spread the good word about Downtown Baltimore, its businesses and the amazing residents who call the fastest-growing neighborhood in Charm City Home – we successfully secured over 300 media placements in local, regional and national news. Whether we were touting programming such as our Restaurant Weeks, Candy Lane, Frightful Flicks or the Charles Street Promenade– or sharing the stories of our BOOST recipients, record-breaking federal funding awards or our yearly goals at the Annual Meeting, we’re using this momentum to drive continued awareness in 2023.

We take our work supporting, connecting, recruiting and retaining small business seriously. We created touchpoints for small businesses to vend and promote at the Charles Street Promenade, Pratt Street Market, CIAA Pop Up, and Candy Lane, in addition to our work on the economic development side with operation storefront, BOOST, and Facade Improvement Grants. DPOB’s outreach team works daily to identify persons living in places not intended for human habitation. They then work to build relationships with these individuals based on trust and environment, and help them connect with opportunities to improve their health and well-being. This year, not only did the team render over 800 services for Downtown’s homeless residents, they were also honored with the JOY award for their dedication to the eradication of youth homelessness.

And we cannot thank you all enough for your ongoing support. We, the collective we, make Downtown Baltimore better together.

300 new neighbors moved into Downtown, which is already the fastest-growing residential neighborhood in the City. This unique partnership was made possible by the quick-thinking team at the Lord Baltimore Hotel that helped ease the housing needs of Morgan State’s incoming freshman class. The Bromo Arts District covers 117 acres on the west side of Downtown Baltimore and is decorated with galleries, open studios, theaters and performance art spaces. This year we hosted two walks – one in June and one in September. Attendees enjoyed hands-on activities such as printmaking, artist demonstrations, various musical and dance performances, and much, much more. Artwork was also available for purchase along the route – promoting the need to support and connect with Baltimore small businesses and artists.

From hosting an Urban Land Institute (ULI) Expert panel at DPOB’s State of Downtown, to marketing Downtown for office and residential… our biggest success this year was catalyzing the moment and building momentum for the future of Downtown Baltimore. There is more federal, state and local money committed to the growth of the Central Business District (CBD) now than in our lifetime. Corporations like FNB, Design Collective, Fearless, Ballard Spahr, M&T Bank, Wells Fargo, CBRE, Gallagher Evelius & Jones, Truist, and BGE are all doubling down by renewing their leases and committing their time and talents. We are excited about taking this momentum into 2023 and continuing our work to make downtown Baltimore a destination of choice for people to live, work, and visit.