Checking in with The Black Genius Art Show

Bryan Robinson remembers spending hours sitting in the back of his Baltimore City Public School classrooms drawing fictitious battles between armies of stick figures when he was a child.

The Baltimore-native is the creative proprietor behind The Black Genius Art Show and Genius Guice Studios — a multi-faceted retail, gallery, and performance space located in Downtown’s Bromo Arts District — that came to life as a result of Robinson’s participation in the Downtown BOOST (Black-Owned and Operated Storefront Tenancy) Cohort Program. 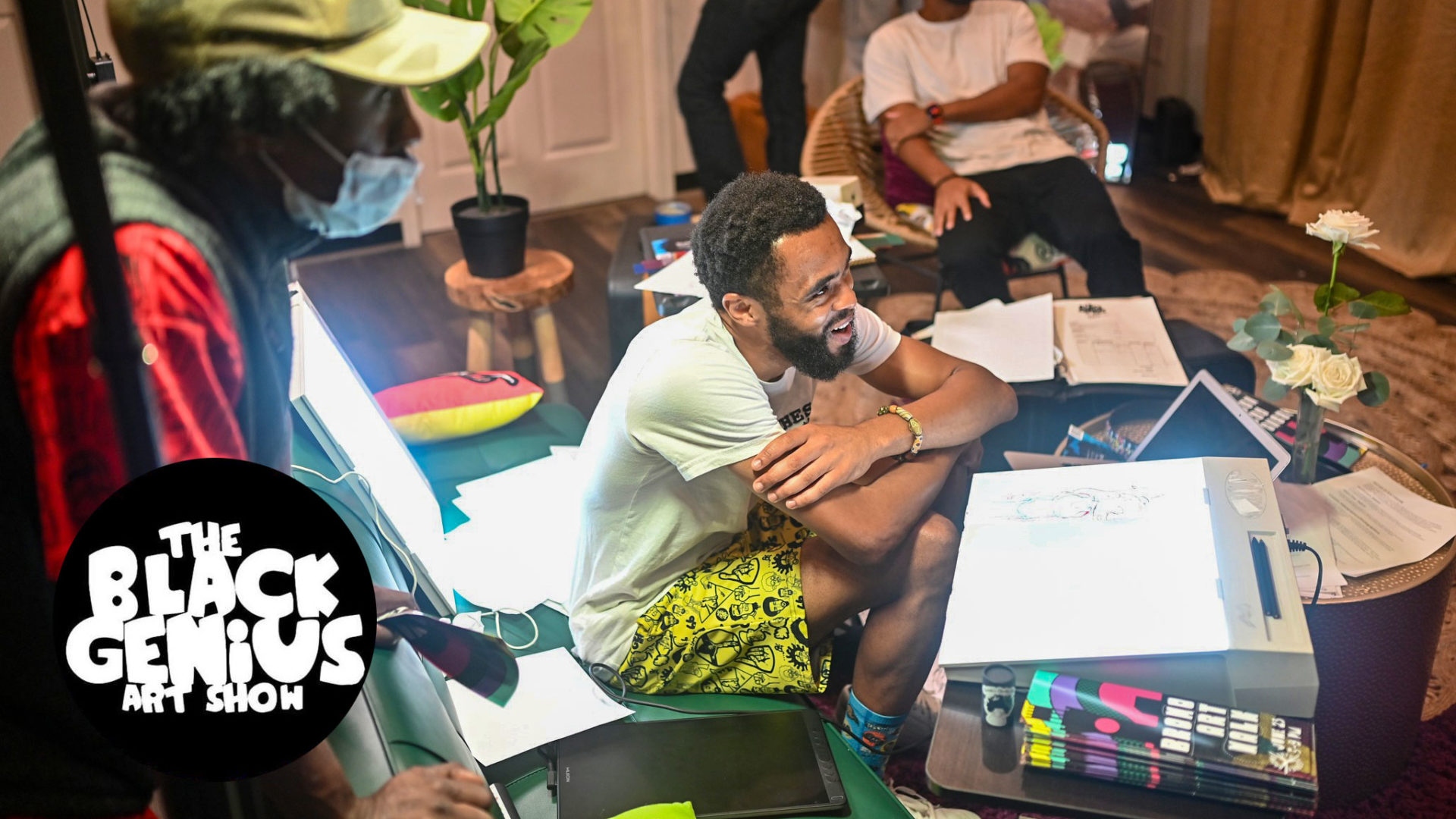 Bryan has been a visual artist for as long as he could write his own name. He’s entirely self-taught and has experimented with a variety of mediums during his creative tenure including drawing, film, animation, fashion, painting, and sculpture. He describes his work as “a mixture of the Mona Lisa and 80’s morning cartoons.”  His illustrations are inspired by what Robinson feels the universe presents before him through family, friends, society, conversation and the rhythms of culture. Robinson finds himself most inspired by the works of Emory Douglas, Jean Michel Basquiat, and Keith Haring. The Inaugural BOOST Cohort poses with Downtown Partnership President Shelonda Stokes at a celebratory dinner to celebrate completion of the program.

Guided by the motto ‘Create Everyday,’ Robinson has generated over 200 original illustrations (acrylic/oil-based paintings), a collection of wearable garments featuring his unique characters, and has additionally produced an assortment of animated projects.  In 2021, BGAS was selected to participate in the inaugural round of the Downtown BOOST Program.  This Downtown Partnership initiative was created in the wake of Covid-19 to strengthen and revitalize the Central Business District of Baltimore by supporting small, creative Black-owned retail businesses and arming them with expert resources to set them up for success. As a result of his participation in the BOOST program, Robinson opened his first art showroom in a vacant Downtown storefront. Genius Guice Studios is a hybrid gallery space that displays revolving artworks, custom collectibles, and original clothing. Robinson also uses the space to hist creative performances and educational workshops for youth and young adults. Artist Bryan Robinson is interviewed on Fox45 for winning the Vans “Foot the Bill” initiative.

“A new program is paving the way for entrepreneurs to attract and uplift Black-owned retail businesses in Downtown Baltimore neighborhoods.”

“Dive into an immersive art gallery filled with original art experiences in the heart of Downtown Baltimore.”

Bryan Robinson speaks to Fox45 about winning the Vans “Foot the Bill” initiative, that was created to help small businesses across the country.